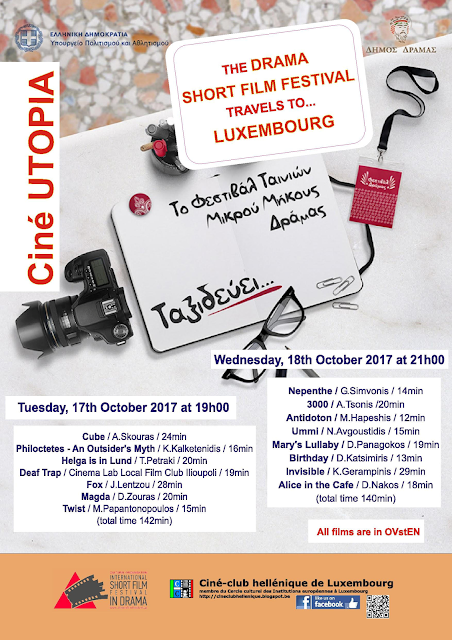 On Tuesday 17 October at 19:00 and on Wednesday 18 October at 21:00 the 2016 INTERNATIONAL SHORT FILM FESTIVAL IN DRAMA (142 min, different program each day) will be screened in cinema Utopia in the original version with English subtitles. The films are not suitable for children.

Tickets for Greek films can no longer be bought at the box office of the cinema. They will be sold at a separate desk by the cinema's entrance. Reservations and card payments are no longer possible.

The ticket costs 9 euros (5 euros for members). You are kindly requested to bring the exact amount with you.


The films were also screened in various festivals in Europe, but they are coming for the first time in Luxembourg. Some that we have particularly liked: Alice in the Café by Dimitris Nakos, Cube by Alexandros Skouras and Fox by Jacqueline Lentzou.

Full Lineup after the jump