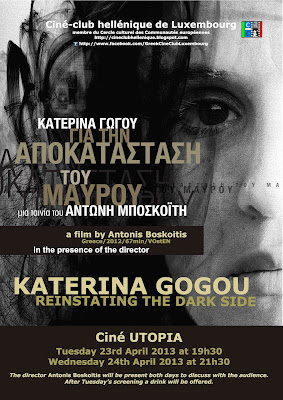 On Tuesday 23 April at 19:30 and on Wednesday 24 April at 21:30 we will screen in cinema Utopia the film Katerina Gogou, Reinstating the Dark Side (Greece, 2012, colour and B&W, 67 min) by Antonis Boskoitis. The film is in the Greek original version with Εnglish subtitles. Suitable for children over 16 years old.

The director Antonis Boskoitis will be present both days to discuss with the audience. After Tuesday's screening a drink will be offered.

Katerina Gοgou lived her life like a flickering candle, wrote her radical poems and shared in other people's pain before she took a rock 'n roll dive into death at the beginning of the 90s.

Gogou is remembered by people whose paths crossed her own, including actors, poets, political activists, directors, singers and songwriters. Her film portrait in black and white is complemented by previously unreleased audiovisual material and dramatised sequences, featuring actress Loukia Michalopoulou. Katerina Gοgou - Reinstating The Dark Side is the last part of a non-fiction trilogy, which started out in 2002 with a portrait of Fleury Dadonaki and continued in 2008 with the history of Greek rock. A series of marginal personalities who lived and died in the city of Athens provides the connective tissue among these three documentaries, shedding light on an idiosyncratic urban landscape that's forever gone.